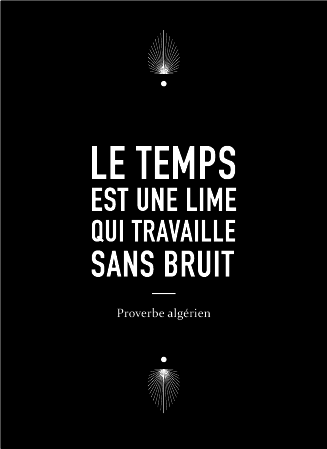 Time is a file that works noiselessly – Algérie
We hear the crash of trees that fall, but not the whisper of the forest – that pushes them.
The young person who has travelled much is older than the old one who has never left the village.
He who can put an egg in a bottle can also get it out.
Heal yourself before tending to others.
It is better to see with one’s own eyes than simply to hear.
The river takes detours because no one shows it the way.
If you hit your head against a jug and it makes a hollow sound, don’t assume that it’s the jug that’s empty.
Everything has an end—except for the banana, which has two.
Little by little, cotton becomes cloth.
For a child to grow up, it takes a whole village.
All white people have a watch, but never have the time.
A canoe is never too big to capsize.
We are more the children of our era than we are of our fathers.
Whoever keeps you from fighting, give him a reward.
People don’t like people—they like their money.
A family speaks through the mouth of their child.
Even children of the same mother don’t always share the same opinion.
Better a smart enemy than a stupid one.
When a family helps each other, what bad could come to them?
You have three friends in this world: courage, intelligence and wisdom.
He who asks questions must accept that he will receive answers.
The eyes trust only themselves. The ears trust others. Only the heart is independent.
Silence, too, is a language.
Beauty does not spare you from learning to work, as it isn’t beauty that will feed you.
A tree trunk, no matter how long it is in the water, will never become a crocodile.
He who swallows a coconut has confidence in his anus.
Each river has its own source.
However long the night, the sun always rises in the end.
Sleep in the house and you will know where the rain falls.


30 proverbs for the notebooks
Trying something without success is not idleness.
By the time an idiot learns the rules of the game, the players have already started.
Big things often come from little ones.
No tree produces fruit without first having flowered.
Every noble action bears fruit.
It’s not what people say about us that’s important, but how we respond to it.
If the current of the river is too strong, one must sometimes give up fighting it.
Only a foreigner (or an ignorant) will drink from a pond where a dog has died.
If the river changes its route, the caiman must follow it.
It is together that monkeys collect fruit.
The grave cannot bury the name of the man who made himself useful.
A loving woman adds to the distinction of her husband.
Marriage doesn’t walk on tip-toes, but on the soles of its feet.
When you do not know someone, call him “big brother”.
Everywhere you are spoken ill of disappears—not out of fear, but to look further.
Man’s dignity is in his given word.
Blessings can’t be bought at the pharmacy.
Man can flee from the gun, but not from his fate.
The waiting lover hears better than a caiman.
He who falls always gets up with an argument on his lips.
By wanting too often to strike one’s enemies, one ends up hitting one’s friends.
A single finger cannot wash the face; strength comes through unity.
A plane always lands, no matter how long its flight.
From wealth to poverty may be less than a day.
A child is like a canoe. If you shape one, then one day it will carry you over the water.
A lie that brings a family together is better than a truth that divides it.
Living at the train station is no reason to have many strangers in your home.
Whoever goes shall see; he who remains will have nothing.
Where peace has spent the day, there is someone who knows something that he did not say.
He who wants honey must not fear the bees.